A story written by Amanda Burnett:

“On March 2, 2020, a tornado swept through Cookeville, TN. It took the lives of a young family of 3, the Kimberlins, who were friends of ours. Many others died as well and many suffered great loss of homes and possessions. The youngest member of our friends’ family who passed was little Sawyer. At 2 years old, he loved to sing. He had his own podium, pitch pipe, and songbook. His favorite song was “Holy, Holy, Holy, Lord, God, Almighty.” Many Christians all over the world sang this song the Sunday after the tornado and shared it on social media with the hashtag #sawyerssong.

I wanted to make a shirt in honor of this family and the loved ones they left behind. This song was the inspiration for my design. It was such a tragic loss, but the family has put their trust and faith in our Almighty God and He has been glorified through all of this.

I let Sawyer’s grandmother know that I wanted to sell the shirt as a fundraiser and asked who we could help with the proceeds. She suggested a playmate of Sawyer’s who was injured in the tornado and was being treated in the hospital for injuries she sustained. Her family had lost their home and all their possessions as well.

His grandmother said that she obviously wished none of this would have happened, but if they had to go on without them, she wanted as much good to come out of it as possible.

With this fundraiser, we were able to help the girl’s family with their medical expenses as well as two families with donations towards their adoptions through Sacred Selections, a nonprofit organization, that raises funds to help families who are adopting with their expenses. “ 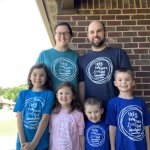