Andrew Muse is an adventurer and content creator who is working on a self-produced Youtube series called Tiny Home Adventure. He has spent the last two years building the expedition vehicle of his dreams in a friend’s garage. He called it “MUSEROAMER”.

Andrew, along with his girlfriend, Ashley, and his pup, Kicker, were about to set off for Alaska in the MUSEROAMER when he broke his leg snowboarding. This brought everything to a screeching halt.

As a full-time content creator, Andrew couldn’t support their lifestyle since he was unable to film during his recovery. He created these shirts to allow their community and fans to contribute to their adventures, and help Andrew out during this tough season.

Andrew hopes that his story and these tees will encourage others to follow their dreams and live their best lives! 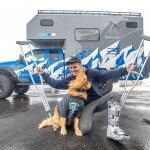