Drake White, a rising country singer/songwriter, is a very down-to-earth performer. He is always talking with his fans and holding intimate meet and greets, and creating tons of friendships along the way. Drake has a very tight-knit fan club called Firestarters, filled with amazing people from all over the United States and Europe. They often get together before his live shows to share stories and help spread the fire of his music.

Drake is known for leaving it all on the stage, and that’s just what he did on August 16, 2019, while performing in Roanoke, Virginia – 15 minutes into his set, his photographer caught him before he collapsed on stage. Drake was diagnosed with arteriovenous malformation (AVM), an abnormal tangle of arteries and veins in the brain that disrupts normal blood flow. Shortly after, he was diagnosed with a brain hemorrhage, as well.

While his fans are missing him out on the road, they were all anxious to do anything they could to support him. That’s when the t-shirt fundraiser came to the surface! The shirt features Drake’s silhouette from a photo taken by Helen Askey, a fan from the UK. Sue Currie, a Buffalo, NY Firestarter, used Helen’s photo as inspiration for the final design, which includes his trademark feather in the AVM awareness ribbon color. The words “Tough as a pine knot” are directly from Drake White’s own song, Elvis, and rang true to the character of him and his recovery.

The response to the t-shirt campaign was incredible. Hoping to sell 25 shirts, they quickly surpassed that goal. After running the campaign a total of four times, they have sold a total of 145 shirts and received a bonus $195 in donations.

His fans will continue to support and encourage him while he heals. The proceeds will provide a little relief while Drake recovers fully. 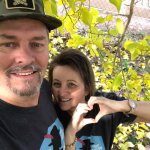 Tough As a Pine Knot