When Doug was just 5 years old he was diagnosed with childhood cancer that spread mostly throughout his pancreas, stomach, and other parts of his abdomen. Despite being so young, Doug was a brave, strong little boy and he beat the cancer. But the radiation that cured his cancer caused scarring and a condition known as portal hypertension, and by the time Doug was 13 years old he had begun suffering from GI bleeds.

The average cost of a multi-visceral transplant surgery is almost $2 million. Even with help of health insurance, which will cover the cost of the transplant, he will need follow-up care and daily anti-rejection medications for the rest of his life. These post-surgery medications and care are very expensive, but are critical to his longterm health.

We created these Running for Doug shirts to help raise money and awareness for Doug and his multi-organ transplant surgery. Any money we raise through this t-shirt fundraiser towards his transplant fund. 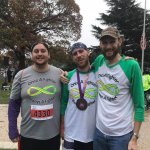