Kaitlyn Merced, of Riverside, California, became inspired when the word “peacemaker” began to pop up in her life again and again as she first started learning about social justice. As she started to learn more about the pervasiveness of all the heartbreaking issues going on in the world, from sex trafficking to homelessness to ocean pollution, the idea of being a peacemaker began to take hold of her heart.

Kaitlyn says, “I think Martin Luther King Jr. summed it up the idea of “peacemaking” best when he said that “True peace is not merely the absence of tension; it is the presence of justice.” This is what being a peacemaker truly is, and is the heart behind The Peacemaker Tee.”

Kaitlyn wanted to raise awareness in her community to show people that they can be peacemakers in this world, advocating for the injustices that they see in their lives and around the world.

In her community, there’s a large homeless population present. You can’t drive down the street without seeing at least one person on the street. She wanted to donate the money from her campaign to Path of Life and The Way, which are organizations in her area that serve the homeless by providing shelter, food, and training to help them get out of poverty. 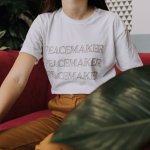