Heili and Morgan were ready for a baby before they even said “I do”. So naturally, their journey to become parents started right when they got married in September 2016.

“We had an idea we would need help, we just never realized how much but we knew together we could do anything. November 2016 I contacted a fertility clinic and in April 2017 we had our first appointment. Following that appointment were many quick trips to the city for ultrasounds and tests. In September 2017 we started our first IVF cycle.”
– Heili Zahara

Heili and Morgan decided to create their “Moving Mountains” Campaign to raise some awareness and share a little more of their story. They chose a mountain design as that’s something that has always brought them peace.

The family ended up raising enough funds for more testing and their fifth transfer which was successful. They now have a beautiful baby boy, Sloan, who can rock his tee all the time! 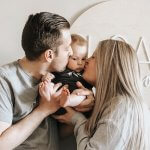 This is one part of our story.