Cut it out! is a campaign launched to spread awareness about epilepsy, surgery for epilepsy, and to support the Claudio Munari Surgery Center for Epilepsy, an international center for epilepsy located at the Niguarda Hospital in Milan, Italy.

We suddenly met epilepsy in 2013, during our summer holidays. Out of the blue. Till that moment everything had been really great. Thanks to the Claudio Munari center our son Leonardo is still with us, so we decided to launch the Epilepsy? Cut it out!(Epilessia? Diamoci un taglio!, in Italian) t-shirt fundraiser to spread the voice about surgery for epilepsy and as a way to raise money for the center (that is an international center, so with patients from all over the world). There’s a website — in Italian only, for now — with our story, but you can also find it on Medium.

Collaborating with A.I.M.E. onlus we organized some fundraisers for the Claudio Munari center. The Claudio Munari center is based at Niguarda Hospital in Milan, but they have patients from all over the world. We already bought equipments and supported the center in various ways — courses, scholarships etc — and we want to keep on supporting it. There’s a lot more to do.

We launched our campaign on Bonfire on Monday 12 February 2018 that was the International Epilepsy Day that year in more than 120 countries. And purple is the official color for that event, also known as Purple Day in fact. So I designed some t-shirts using the logo from the original fundraising “”Epilessia? Diamoci un taglio!”” (Epilepsy? Cut it out!).

Why a t-shirt with just a logo?

I want to support the Claudio Munari center but also design a t-shirt that people want to wear. So I decided to use only a symbol. It conveys a profound meaning per se: it represents a neural network with abnormal activities on the left side, and a normal neural network on the right side, separated by a cut, the surgery. 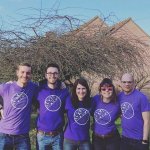