Did you know that in most states, when a student is convicted of sexual misconduct and dismissed from their college or university, there is little to no indication on their transcript as to why they were dismissed? At some institutions, a small asterisk acts as a catch-all notation to symbolize that the student has been dismissed, but provides no further details.

Explain The Asterisk is a legislative campaign that is fighting to get laws passed that would require colleges and universities to explicitly indicate when a student has been dismissed on the grounds of sexual misconduct, domestic/dating violence, stalking, etc.

Explain the Asterisk crowdsources their t-shirt designs from their community, and uses Instagram to vote on their favorites.

Since their advocacy began, both New York and Virginia have passed legislation on the state level requiring their institutions to note a “red flag” when a student was dismissed on dangerous grounds.

Young Professionals Give Back to Their Community, Together

Young Professionals Give Back to Their Community, Together 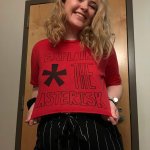