When Russia invaded Ukraine in February of this year, Ajona (she/her), who is half Russian / half Ukrainian and living in Los Angeles, CA, felt called to action. Her Support for Ukraine t-shirts are raising funds for World Central Kitchen, United Help Ukraine, and Revived Soldiers Ukraine.

Here is Aljona’s story written in her own words.

“I am half Russian and half Ukrainian and when the war started I felt completely overwhelmed and heartbroken. So, I decided to create shirts that would accomplish several things: help Ukraine financially through several charities, show support for Ukraine in a creative way, and allow other people to show their support with artsy t-shirt designs. And I was already able to raise a good amount!

As the war is still going on in Ukraine my biggest hope is that people continue supporting Ukraine. That includes continuing to raise awareness and sending financial aid for the army, animal rescue groups, children hospitals, refugee organizations and other organizations such as World Central Kitchen that is currently providing meals across all of Ukraine.

I am really fascinated by the strength and courage of Ukrainian people – I think we can learn from them what it means to stand up for freedom and democracy.

At the time of writing this, Aljona’s campaign has raised over $250 for World Central Kitchen, United Help Ukraine, and Revived Soldiers Ukraine. 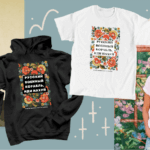