In 2014, a simple crossing of paths, started our founders on a path of fostering dogs. Two years later, and after opening their home to a multitude of dogs, their lives changed forever.

On a day that started like any other, a little senior dachshund inadvertently ended up on transport with no destination. For two hours, this little dog stayed in the arms of his future foster dad, unsure of his outcome. When a decision was to be made as to what would happen with him, there was no question he had to stay.  For several days Albert spent time in another foster home tormenting the resident cat before he landing in the home of our founders, Mandy and Darren.  And, that is where their story begins.

It took no time at all for Albert to steal their hearts.  He quickly earned himself a Facebook page and a plethora of followers who loved his spirit and little antics.  This tiny guy, who was suffering from Congestive Heart Failure and years of neglect, charmed the pants off anyone who met him or followed his story.  After about seven months with Albert, Mandy and Darren initiated an online fundraiser to expand their footprint in rescue by converting their two-car garage into a foster space.  A retreat for new dogs or dogs that needed downtime and decompression as they acclimated to their new home.  The new space was to be called Albert’s Dog Lounge.

Shortly after the fundraiser kicked off, life changed abruptly again when Albert passed suddenly.  Mandy and Darren were devastated beyond words. Albert had an impact was indescribable and had already affected them in ways they hadn’t even begun to see yet.

After some time to grieve, it was clear what their mission was. The decision to help others in his memory and honor began to take shape.  In late 2017, Albert’s Dog Lounge went from being a foster space to a 501c(3) non-profit. In January 2018, Mandy and Darren partnered with friends, fellow fosters, and senior dog lovers, Jody and Scott Fisher. They began independently rescuing seniors together with a goal of helping fifty (50) seniors, special needs, and hospice dogs in their first year.

Together Mandy and Darren have rescued senior and special needs dogs from Wisconsin, Illinois, Missouri, Alabama, Tennessee, and Texas with no plans to slow down. If there is one thing we all have all learned from Albert, it’s that old dogs really do make great new friends! And that is where the logo to the shirts came in, and the reason for why we do what we do. 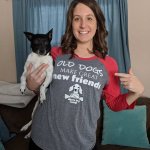