Three years ago Delaina Doshi’s friend, Louise died by suicide. She loved God, others, her friends and family with a love so fierce and pure. To be loved by her was to be fully known and accepted. This year, Delaina decided sell apparel to honor the memory of Louise and to raise money for the American Foundation for Suicide Prevention (AFSP) in her honor. This organization does so much to help both victims of mental illness and survivors of those that have died by suicide.

“This year’s design was inspired by how Louise LIVED. Too often people who die by suicide are only remembered for the way they passed and not how they lived. I wanted this design to reflect the love she showed. I raised over $900 and was able to get my donation matched!” 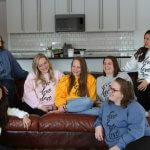