In January 2013, I was working out at a local gym. I woke up in the ICU to find out that I had suffered from a ruptured brain aneurysm. At the age of 23, I had no knowledge about this condition that almost took my life. About 40% of people who suffer from brain aneurysm ruptures die shortly after, and most brain aneurysm survivors will suffer from neurological deficits. It was not until after my 2-week hospital stay that I learned more information about this condition that impacts 1 in 50 people.

I missed a semester of work as a high school teacher, and a multitude of things in my life changed as a result of this condition. The recovery process was isolating because I did not know anyone else who had experienced this. As time passed, I sought out support groups online where I talked to people who had gone through the same thing as I did. I have participated in the annual Chicago Brain Aneurysm Walk for several years, and decided to make t-shirts this year.

My team name is Calm, Cool, and Coiled because I now have an aluminum coil inside my brain to prevent the aneurysm from growing or rupturing again.

I used another online company to create shirts for the walk, and at the walk we had many compliments from people about the shirts. I decided that it would be a cool idea to sell them to other survivors around the country, and just needed a platform.

In September for Brain Aneurysm Awareness Month, I created an Instagram account, @aneurysmawareness, to spread information about aneurysms and connect survivors.

I did not know what this would turn into, but I knew that I saw a lack of resources available to survivors and their families. I hoped that this page could be of use to the community. Since September, the page has grown to almost 500 followers and reached across the globe to places like England and New Zealand.

My Instagram account was my main platform for selling these t-shirts. I launched the t-shirt sales as a fundraiser for the Brain Aneurysm Foundation, and was able to donate almost $100 from a few months of sales. The “Calm, Cool, Coiled” phrase evolved into another design, “Calm, Cool, Clipped,” as many brain aneurysm survivors have clippings instead of coils. It is endlessly awesome to see people wearing and sharing my design. This year I celebrated my 5th year “annie-versary”. I am excited to see how this campaign will continue to grow and spread! 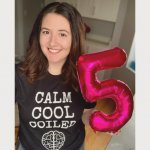