Liz Pound originally created her t-shirt fundraiser with the hope of raising money for her mission trip this summer. Along with the rest of the world, her plans changed this spring, and with it, so did her fundraiser. This is her story.

Originally, this design was created and dreamed up as a friend and I planned on moving to Yellowstone National Park together for the summer to serve. With relationships shifting and with the threat of the virus, we decided now was not the time for our National Park plan and I found myself heartbroken and restless and unsure as to what to do with the funds we had raised from the first fundraiser.

It could not have been a more timely decision. A few weeks after, and as I was praying about what to do with all the money and even the design itself, is when I first heard about the murder of George Floyd and the protests that had begun in the heart of my city, Columbus, and protests that were sparked all around the world. My heart was twisted and broken and confused and wanted nothing more than to help in any way that I could by standing alongside my black brothers and sisters and standing up in the face of this deep racial injustice that has existed in our country for centuries.

I’ve always wanted to use my creativity and talents to help others and to advocate for the things I’m passionate about, and the Black Lives Matter movement, especially now, is held very close to my heart. As I experienced protesting and even brutality from the police firsthand as I was in downtown Columbus shooting some photos to document what was happening, I knew I couldn’t stay silent.

The phrase “Heal Our Streets and Land” was intended for one thing, but has been designed perfectly for a cause that’s so much bigger than myself or my plans. Reopening this campaign through this lens has challenged me to see that this is a prayer, a cry, and an anthem for this generation as we continue to fight for and advocate against any traces of racial injustice we see today. Our voices now are more important than ever.

At the time of publishing this Story, Liz has been able to sell more 50 shirts and raise over $700. All past and future proceeds from her campaigns will be donated to the NAACP for further police reform and research, as well as to aid in local black owned businesses and families in Columbus. 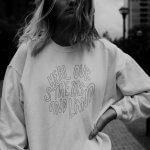 Heal Our Streets and Land BLM