When Yogi Bear was 4 months old he contracted bacterial meningitis. No one thought he’d survive, but he did. Yogi had to re-learn how to walk and have a very difficult recovery.

The whole ordeal was extremely difficult and expensive for our family. We had so many people asking to give us money because Yogi has a lot of Instagram followers but we didn’t actually need the money because we had previously saved it for a house. However, we realized how many families don’t have the money to get their pets the life saving care they need so we started to raise money for FACE Foundation, which is a non-profit that aims to end economic euthanasia.

Once Yogi recovered, we discovered that he actually had a congenital liver defect and that’s the reason he got so sick to begin with. That’s when we launched our Yogi’s Bears fundraiser on Bonfire. Leading up to Yogi’s big liver surgery, we sold shirts to raise money for FACE because we knew if we could save other dogs, then everything would be ok.

Out of Yogi’s tragedy, we have managed to raise close to $6,000 which has saved the life of 4 dogs so far.

Raising Money for JDRF One Walk

Raising Money for JDRF One Walk 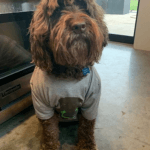